These medical grade imaging transducers are fabricated using gold plated PVDF or co-polymer films. All other external surfaces (i.e., transducer case and connector) are made from titanium. The thickness of the film and the backing method determine the natural frequency of the transducer. Such constructions yield transducers with frequencies ranging from 35 – 50 MHz and fractional bandwidths typically exceeding 95%.

When combined with a programmable bipolar pulser (such as the one offered by CLI) it is possible to somewhat manipulate the emitted frequency of these transducers. For example, a center frequency ranging from 30 MHz to 40 MHz may be achieved by manipulating the width of the pulse used to excite a 35 MHz thin-film transducer.

Monopolar pulsers may also be used, however the emitted frequency is generally lower than when a bipolar pulser is employed. 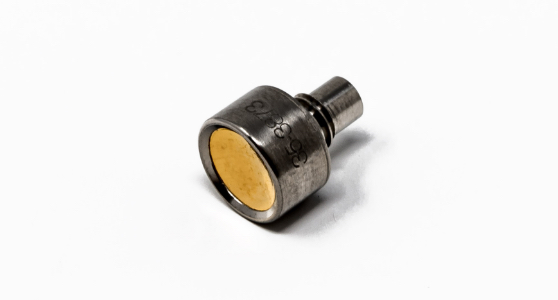 Specifications for standard thin-film transducers may be found at the bottom of this page. Custom configurations are available, including other diameters, focal depths and connector types, including flying wire. 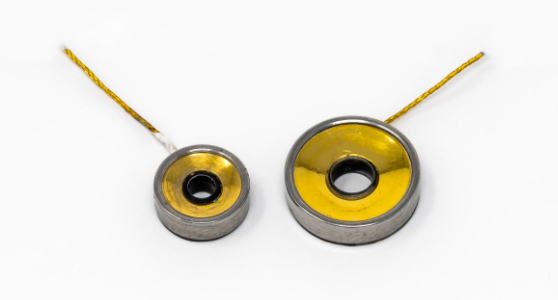 These transducers are used in photo-acoustic imaging applications (see below). Construction methods are highly proprietary. Diameters, focal depths, frequency, central hole diameter, and connectivity are variables that may be specified by the buyer.

Typical imaging applications are those requiring very high resolution, but low penetration. Effective imaging depths vary depending on the attenuation of the tissue, or media, interrogated. Typical uses include imaging of the cornea and anterior chamber of the eye, and various dermatology applications.

One new and exciting use for these transducers is photo-acoustic imaging. CLI has developed a novel toroid transducer that incorporates a central hole through which a laser is used to interrogate tissue. The thin-film transducer acts as the receiver of “echoes” returning from tissue excited by the laser. CLI is one of the few, if not only, commercial producer of such transducers. Diameter, frequency, central hole diameter and other parameters are user-specified.

Specifications (not including toroid transducers)